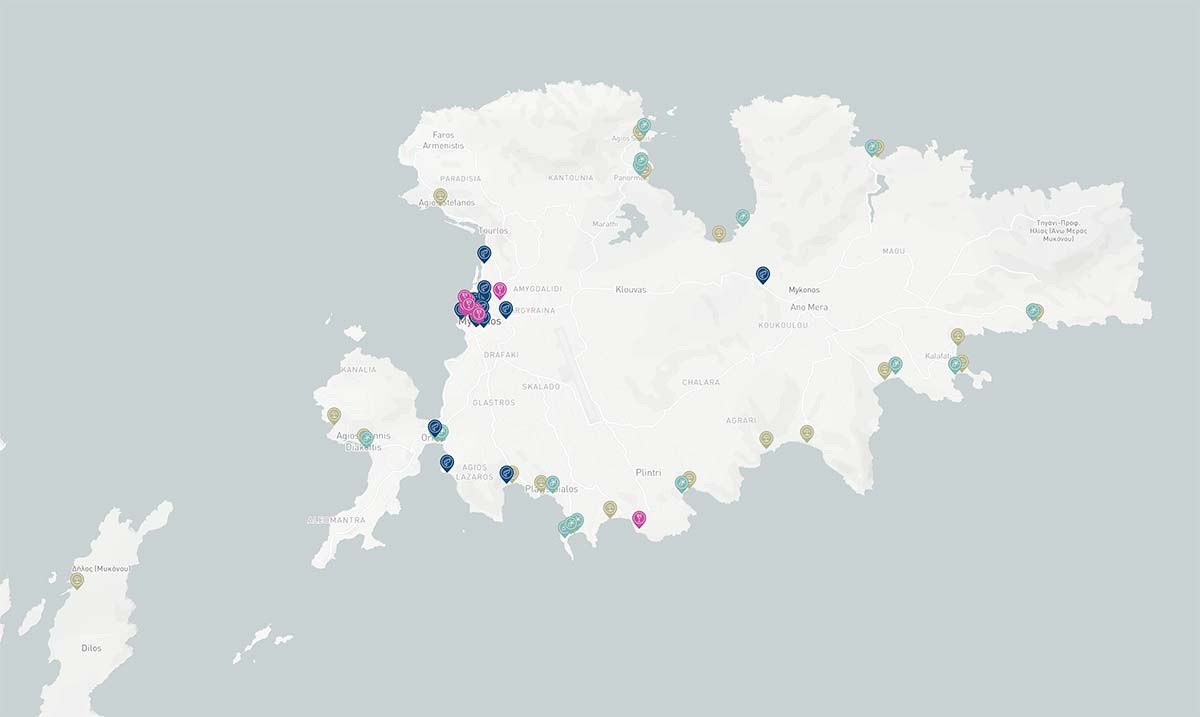 The Greek island of Mykonos is situated in the centre of the Aegean sea, 150 Km east of Athens. The island can be divided into five areas, each with its own characteristics and microclimates, all equally beautiful suited different taste and needs. Along with its nature and beautiful sandy beaches, the island is also renowned for its exclusive nightlife and modern Greek cuisine. Mykonos can be reached by sea, with modern fast ferries from Piraeus port and from other major island. The Island international airport handles several direct flights from all major European cities and many daily domestic flights from Athens.


Mykonos climate is very particular and unique in the Mediterranean sea. Rainfall is very infrequent and sunshine is almost guaranteed. During summer months the temperature may only occasionally reach the upper 30’s but due to the cooling factor of the frequent north wind the Meltemi , an average between 25 and 28 degrees Celsius can be expected.

The South-West part of Mykonos island is the most renowned and exclusive; it includes areas such as Agios Ioannis and Ornos. The convenient proximity to Mykonos Town, easy access to some of the nicest beaches and for the breathtaking views of the sunset and the sacred island of Delos and Rehnia, make this area in high demand amongst the Athenians. Although some parts are highly developed, the beauty and intimacy typical of the Cycladic architecture still blends harmoniously with the local rocky nature.

The South part of the island is renowned for its many beautiful beaches, all well organised, with comfortable sun beds and umbrellas, beach-bar service and trendy restaurant such as famous Psarou and Kalo Livadi. Most of the beaches are also reachable by boat, either privately or with the traditional Kaiki beach hopper.The southern view from Mykonos is also special, with the Island of Naxos immersed in the blue of the Aegean Sea dominating the scenery. During summer months, from this side of the Island you can admire the most colourful sunrises and moonrises; it is also the preferred area by many on heavy Meltemi days.

The Southern East part of the Island is considered by many the most beautiful, because of its almost untouched Cycladic scenery. Many new exclusive private properties have been recently built here, where guests can find peace and privacy. The area offers magnificent views and have easy access to some more secluded but equally beautiful beaches. The closest town is Ano Mera, only few minutes drive, where main shops are found. The main Island’s road connects East to West with a 20 minutes drive, so Mykonos Town is not as far away as it seems.

The North face of Mykonos is often labelled as the “windy side” of the island, due to its direct exposure to the Meltemi, the northern summer wind. It is only partially true, since some homes are cleverly located and built in wind-sheltered locations. The north side offer probably the best nature, scenery and views of the island as well as some of the best free beaches, such as Agios Sostis Beach, a true paradise for those looking for a some seclusion and Cycladic nature. The North-West side became in recent years one of the most exclusive location on the island, enjoying stunning views and town proximity.

The West central coast of Mykonos is where the picturesque “chora” - main town - and the old port are located. Renowned for the golden sunsets and the amazing panoramic views, the surrounding hills are populated with myriads of little chapels and small traditional homes. Mykonos town is the focal centre of activities of the island; day and night, the tiny streets of town are bustling with people everywhere. Classy boutiques, cafes and restaurants for every taste and pocket, funky bars and clubs, Mykonos is unique for the variety of choices.